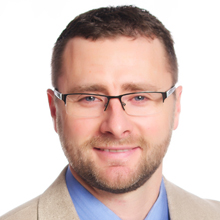 Cory Rideout is the Director of Education/CEO for Light of Christ Catholic Schools, North Battleford.

Born and raised in Conception Bay South, Newfoundland, Cory moved to Saskatchewan in August 2000 to pursue a teaching career. Before arriving in Saskatchewan, he served ten years in the Royal Canadian Navy. A highlight of his tenure was the opportunity to serve as a peacekeeper.

Cory earned bachelor degrees in Kinesiology and Secondary Education from Memorial University of Newfoundland, as well as a master’s degree in Educational Administration from the University of Saskatchewan. He held positions as a vice-principal and principal in Lashburn. Prior to joining the team at Light of Christ and making the move to The Battlefords, Cory, his wife Michelle and their two children, resided in Meadow Lake, where he was the Superintendent of Human Resources for the Northwest School Division. Cory also holds a national designation in Human Resources (CHRP).